The PacMan frog is a beautiful amphibian that originates from the jungles of South America. Discover the features and wonderful characteristics of this awesome frog.

PacMan frog is the general term given to the horned frog, a medium to large terrestrial frog that hails from the warm jungle areas of South America. They are called horned frogs because of the horn-like features above their eyes.

The “PacMan” nickname was given due to the ferocious appetite and large mouth of the horned frog. They will attempt to eat almost anything that comes in close proximity. These frogs are known to go after prey that is much larger than themselves.

Let’s get to know the PacMan Frog just a bit better.

Characteristics of the PacMan Frog

PacMan frogs originate from the warm and humid jungle areas of Brazil, Argentina, Paraguay, and Colombia. These frogs spend most of their time burrowed into the jungle floor with only the eyes sticking out.

PacMan frogs will find a suitable burrowing spot and begin turning and pushing themselves down backwards into the soil until they are almost completely covered. They then patiently wait until prey happens to walk by when they will very quickly jump out to grab the food.

They use their large mouth and powerful jaws to clamp down on prey until it is lifeless. Once the prey stops moving the PacMan frog begins to swallow the item whole. PacMan frogs attempt to go after whatever crosses its path. They can attempt to swallow snakes and even small birds.

The Appearance of the PacMan Frog 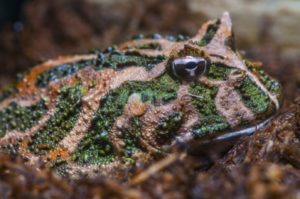 Females are generally the most colorful while males tend to lose their colorations as they age. The varying color patterns is but one of the features that make this frog so popular among hobbyists.

They have horn-like features above the eyes that help protect the eyes from debris and while capturing prey. The large mouth features sandpaper-like teeth behind the upper and lower lips. The tiny teeth help the frog hold on to resisting prey.

These aggressive frogs usually go after almost anything that moves. Be careful when reaching into the terrarium – the PacMan frog may go after a moving hand!

There are eight known species of PacMan frogs, all part of the Ceratophrys genus.

Recently, a new breed of PacMan frog has become available called the Fantasy Frog (C. cornuta x C. cranwelli). The Fantasy frog is a cross between the Chacoan horned frog and the Amazonian horned frog. Fantasy frogs come in a wide range of striking colors. Colors can range from light green with red and yellow markings to dark brown with light brown markings. This array of varying color is one of the factors that has lead them to become a favorite among hobbyist.

We recommend that only experienced PacMan frog owners acquire fantasy frogs due to picky feeding habits.

The Chacoan and Ornate Horned Frogs 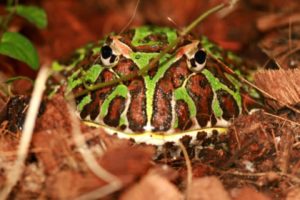 The most commonly found PacMan frog found in the pet industry today is the Chacoan horned frog (C. cranwelli). This popularity is due to:

The ornate horned frog (C. ornata) is also a very popular pet species because of its beautiful coloration. It originates from Brazil, Paraguay and Uruguay. Mislabeling by pet stores and breeders causes some confusion between the C. cranwelli and the C. ornata.

As an Amazon Associate I earn from qualifying purchases.

Please refer to the Disclosure Policy for more information.